The US Secretary of State and foreign ministers of the seven other Arctic governments signed the Agreement on Enhancing International Arctic Scientific Cooperation on May 11, 2017, in Fairbanks, Alaska. The agreement facilitates access by scientists of the eight Arctic governments to Arctic areas that each government has identified, including entry and exit of persons, equipment, and materials; access to research infrastructure and facilities; and access to data. The agreement also calls for the parties to promote education, career development, and training opportunities, and encourages activities associated with traditional and local knowledge. The agreement entered into force on May 23, 2018.

As per the map shown here, the US geographic area covered by this agreement includes territory north of the Arctic Circle and north and west of the boundary formed by the Porcupine, Yukon, and Kuskokwim Rivers; the Aleutian chain; and adjacent marine areas in the Arctic Ocean and the Beaufort, Bering, and Chukchi Seas. This area is based on the definition of the US Arctic region in Section 112 of the Arctic Research and Policy Act of 1984, as amended. 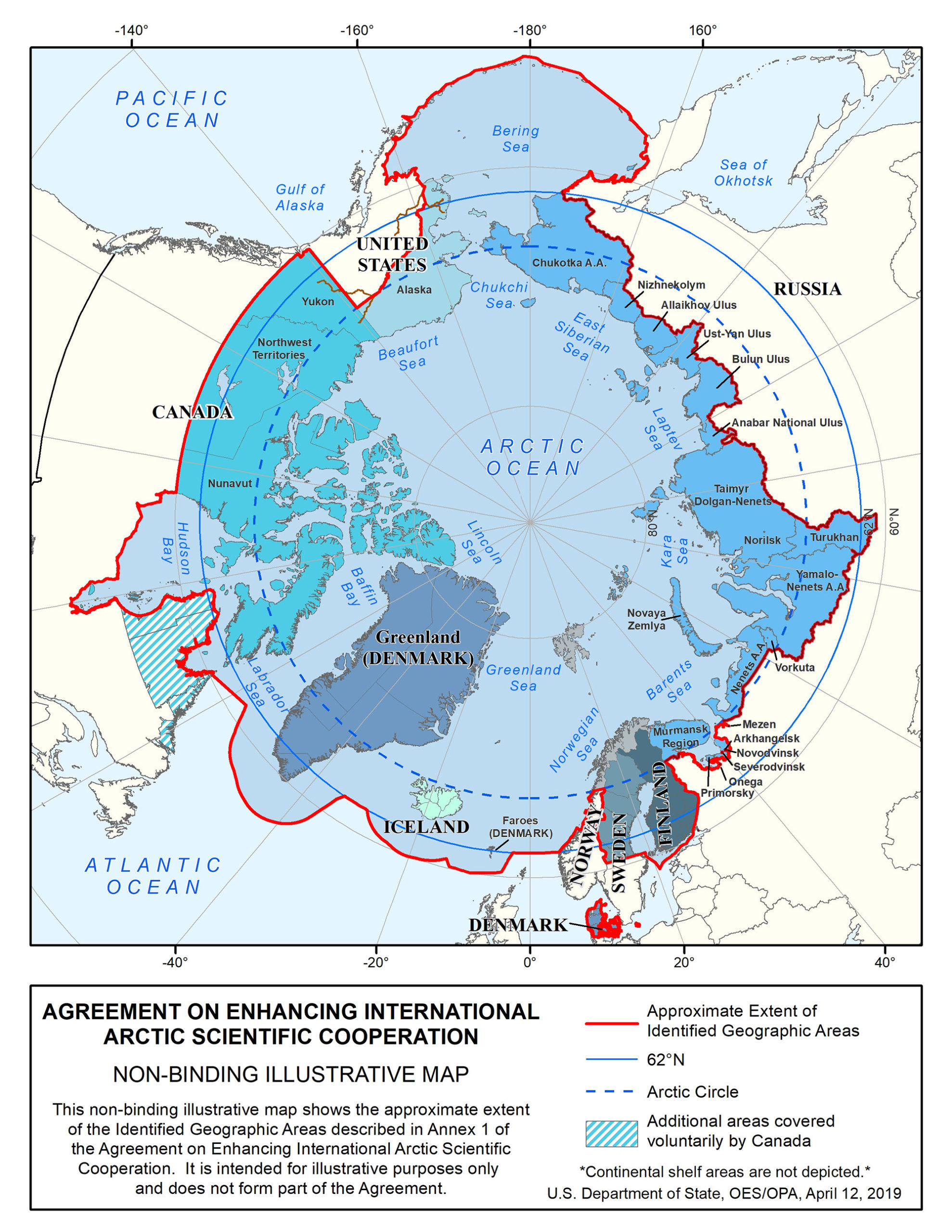 > View the Agreement online
> Download the Agreement (9.3 MB pdf)
Additional information on the agreement is available on the Arctic Council Secretariat website.

What does the Agreement do?

To which Arctic geographic areas does the agreement apply?

The areas are described in Annex 1 of the Agreement, and are shown graphically here.

Who should I contact with questions or concerns about issues addressed in the agreement, such as difficulties gaining international access for scientific research?

For authorization of Marine Scientific Research…

For all other issues…

US scientists and other “parties” (as defined in the agreement) encountering difficulties addressed in the agreement in any of the other seven Arctic governments (Canada, Denmark [Greenland/Faroes], Finland, Iceland, Norway, Russia, and Sweden) should contact the US Arctic Research Commission (USARC), which is, as per the agreement, the “competent national authority” for the United States of America. Specifically, contact Dr. John Farrell, Executive Director (703-525-0113, jfarrell@arctic.gov). Please do not attempt to directly contact the competent national authority in a non-US Arctic nation. The national authorities prefer to engage directly, with each other, on behalf of scientists in their respective nations.

Scientists based in the other Arctic governments who are encountering difficulties in attempting to conduct research in the United States, or in other Arctic nations, should contact their respective authorities, listed in Annex 2 of the agreement.

Scientists from governments that are not signatories (i.e., non-Parties) to the agreement but are encountering difficulties while attempting to conduct research in the US Arctic region should seek assistance from their governmental representative who would, on behalf of the scientists, contact the US Arctic Research Commission (USARC), specifically, Dr. John Farrell, Executive Director (703-525-0113, jfarrell@arctic.gov).