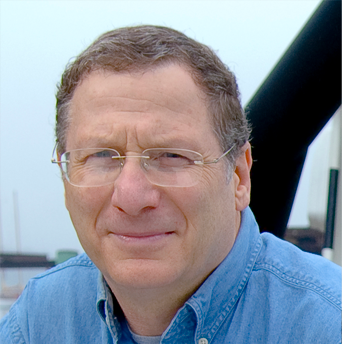 
Professor Larry Mayer is the founding director of the Center for Coastal and Ocean Mapping at the University of New Hampshire and the co-director of the NOAA/UNH Joint Hydrographic Center. Mayer was elected to the National Academy of Engineering (NAE) in 2018 for developing techniques and technologies in coastal, Arctic, and ocean floor mapping.

He has a broad background in marine geology and geophysics and his research interests include sonar imaging, remote characterization of the seafloor, and advanced applications of 3-D visualization to ocean mapping challenges. He is jointly appointed in UNH’s Ocean Engineering and Earth Science Departments. Mayer has participated in more than 90 scientific research expeditions (over 70 months at sea) during the past 40 years. He has been chief or co-chief scientist of numerous expeditions including seven cruises on the USCG Icebreaker Healy  mapping unexplored regions of the Arctic seafloor in support of a potential U.S. submission for an extended continental shelf under the Law of the Sea Treaty.

Mayer was awarded the Keen Medal for Marine Geology, an Honorary Doctorate from the University of Stockholm, the University of New Hampshire’s Excellence in Research Award and the University of Rhode Island’s Graduate School of Oceanography’s Distinguished Alumni Award. He served on the President’s Panel for Ocean Exploration, and chaired a National Academy of Sciences committee on “National Needs for Coastal Mapping and Charting.” He co-chairs NOAA’s Ocean Exploration Advisory Working Group and chairs the National Academy of Sciences Ocean Studies Board.